A lot of people know that I love music but most people won't know that I can play the harp (badly). It doesn't get more Welsh than that!

Apart from making this A-List, you mean? Definitely celebrating the end of Sapphire's biggest ever FY with the team of people that made it happen. They're a great bunch and I'm very lucky to work with them.

That's a loaded question! I'd like to say Kate Winslet, but I'm sure my colleagues would probably say Meryl Streep, channelling her character in The Devil Wears Prada…

Over the years, I've admired many of our competitors, particularly those startups that remained true to their identity and focused on what they do best. Unfortunately, they tend to lose that when they get acquired and there aren't many specialist independents left, which is a real shame. But I do really admire those entrepreneurs in the channel who have set up and run their own successful businesses - it's hard graft.

I'd make sure a lot more money was ploughed into education and also supporting clubs, activities and sports for kids outside school hours - sitting indoors playing Fortnite on the PS4 is not healthy.

Getting more young people into our industry. We all know that we have a real shortage of people coming into cybersecurity and we need to figure out how to address that. Then we need to improve how we take that raw talent and enthusiasm of school leavers or graduates and ensure that they have the opportunity to learn from experienced and knowledgeable consultants, creating an elite new resource within the industry.

Jewellery that belonged to my grandmothers. They were a huge influence on my life and were both amazing, strong women. I was lucky to have them both in my life into my 30s and I hope I made them proud.

I started off my career in IT security selling firewalls back in the 1990s. If you asked my mum, she'll probably tell you that's what I still do - sell firewalls (which isn't entirely inaccurate!).

I've worked for and with some very successful people during my career so far and I've learnt a great deal from some of them. So I can't say I've just had one mentor. More recently I've been privileged to spend time with other Leadership Fellows at St George's House at Windsor Castle, where business leaders across all sectors get together to talk about the issues of the day and to discuss leadership; it's a real learning experience and I've been lucky to meet some impressive people there. 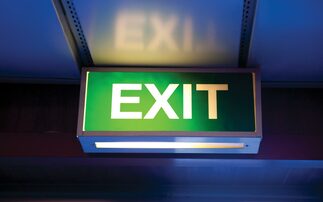